Short Film, Pre-uni, Personal
Project Overview
Do you ever have those memories you wish you could forget that linger in the back of your mind?
details
Short Film (2 Min), Process Book
December 2016 - January 2017
Adobe Premiere Pro, After Effects, Audition, Photoshop, InDesign, Google Docs

During the last month of each year in my previous arts program in high school, we were required to do an Independent study unit (ISU), I decided to try and create a short film.

First I brainstormed a concept came up with the idea of static, white noise, etc. Here's a few major dot notes from my brainstorming.

Inspiration for this project came from a variety of sources. For this piece I watched a lot of videos from independent artists on vimeo and youtubers I followed at the time. 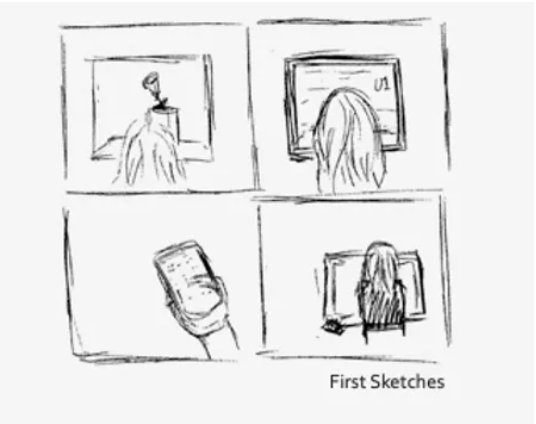 To begin the project, I did a lot of sketching and preplanning to solidify the concept and the images I wanted to portray.

I also made a project timeline in order to effectively allocate time to the different parts of the project. One tip I still recalled from my teacher was that editing was going to take 3 times as long as filming and took that into account in the timeline. 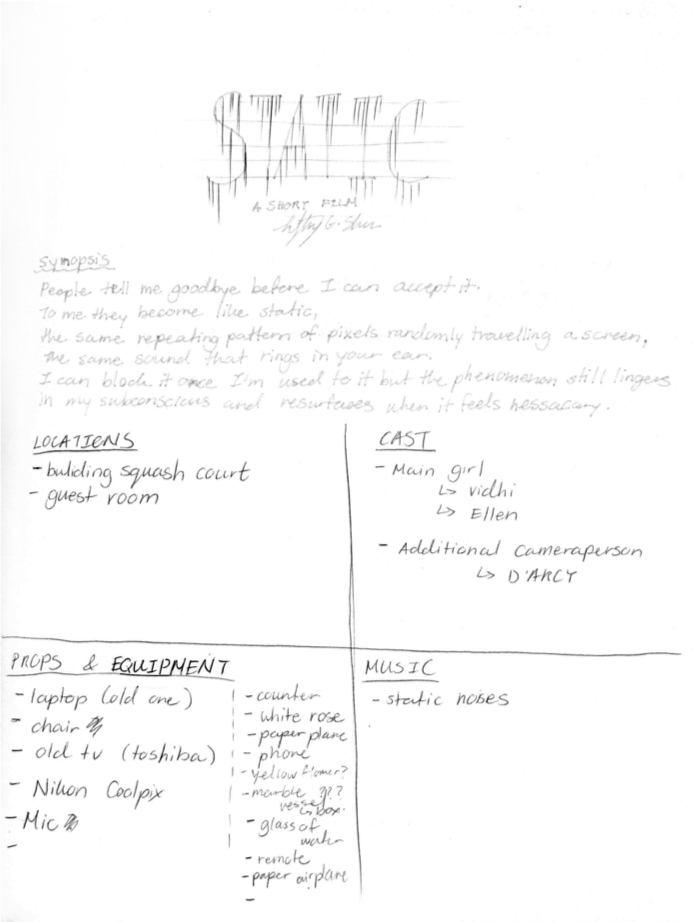 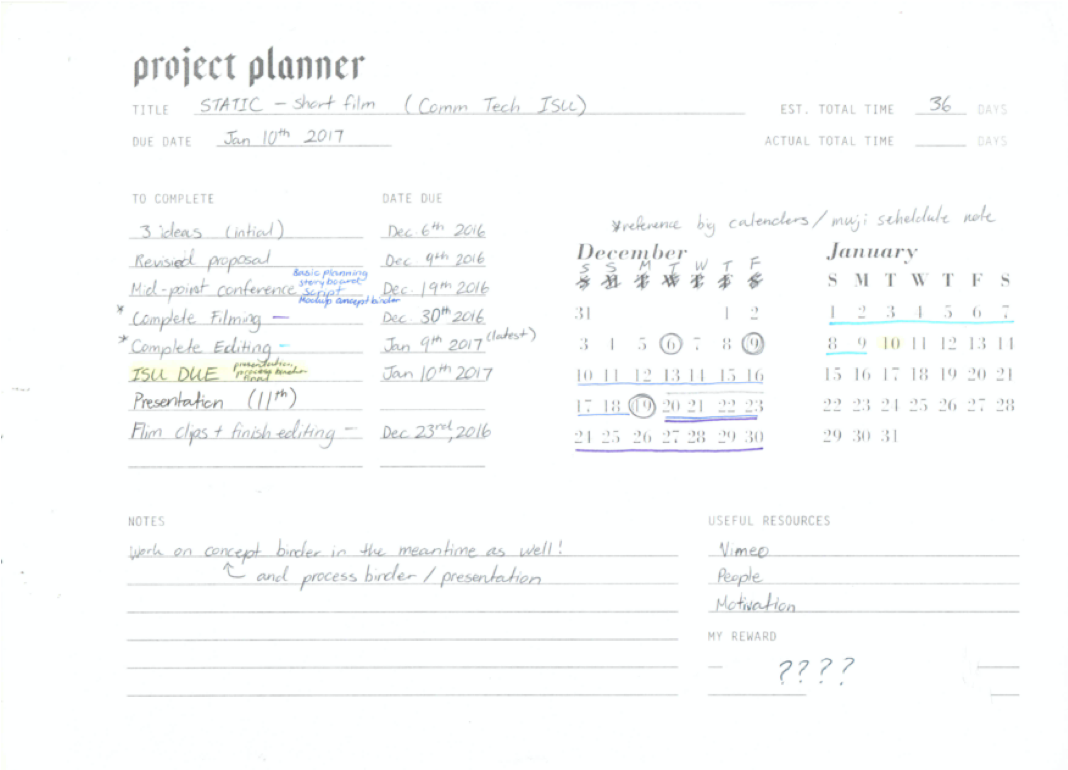 After all the preplanning was complete I wrote the script for the short film, taking into account the different shot types and specific visuals beyond the words.

The script was complete and I decided to move into film tests and recording the audio. At this point school was out for winter break so I made sure to prearrange meetup days with cast member and friends that agreed to help me on this project.

My friends Vidhi and Maria agreed to help out in my short film, Vidhi to act in my film and Maria to assist on set and do the voiceover.

And thus I began filming and started with some filming tests specially with a giant teddy bear I owned to mimic the size and shape of a human and what lighting I wanted to play around with. 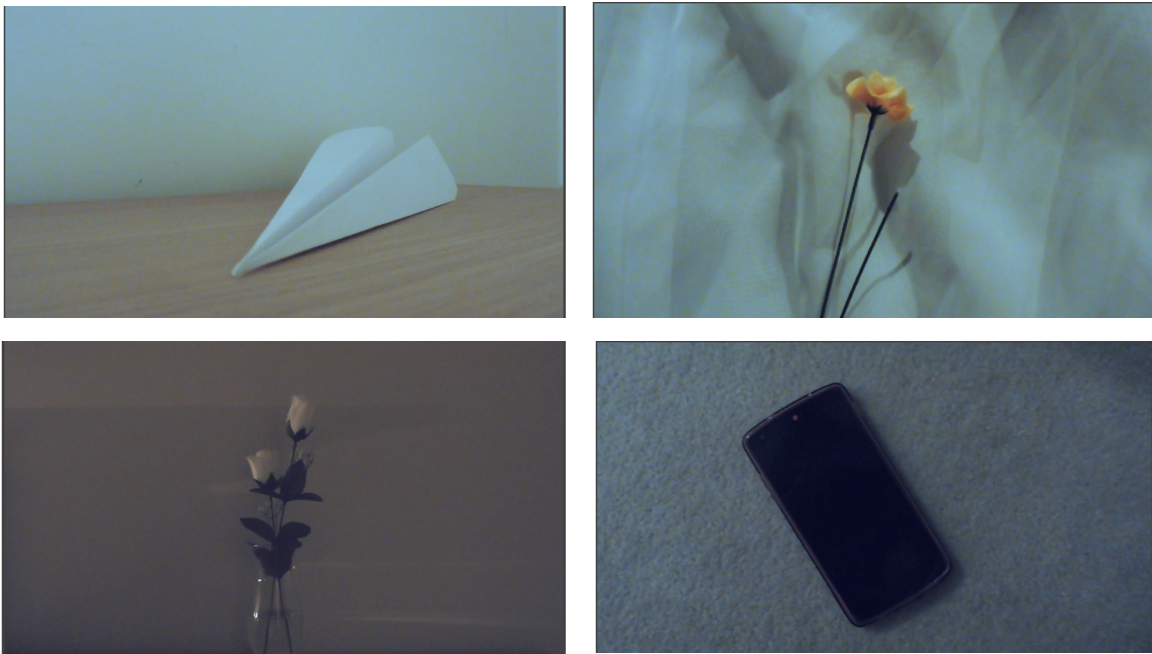 A major component of my short film were the object metaphors, so I filmed the individual clips for each object metaphor prior to final filming day with my cast.

I wanted each object metaphor to have a glitch effect to match the idea of static so I completed the edits for each clip. I used a variety of tools including key-framing, RBG curves and effects to achieve the glitch effect.

Trying to burn the glitch clips the day before

I originally wanted to project the glitch clips on the older tv I had for a specific shot; however, the day prior to film day I was not able to burn the clips onto a CD to project onto the older TV. So I scraped that idea and tried a different method of using my newer TV which allowed projections from HDMI cables to achieve the shot I wanted. 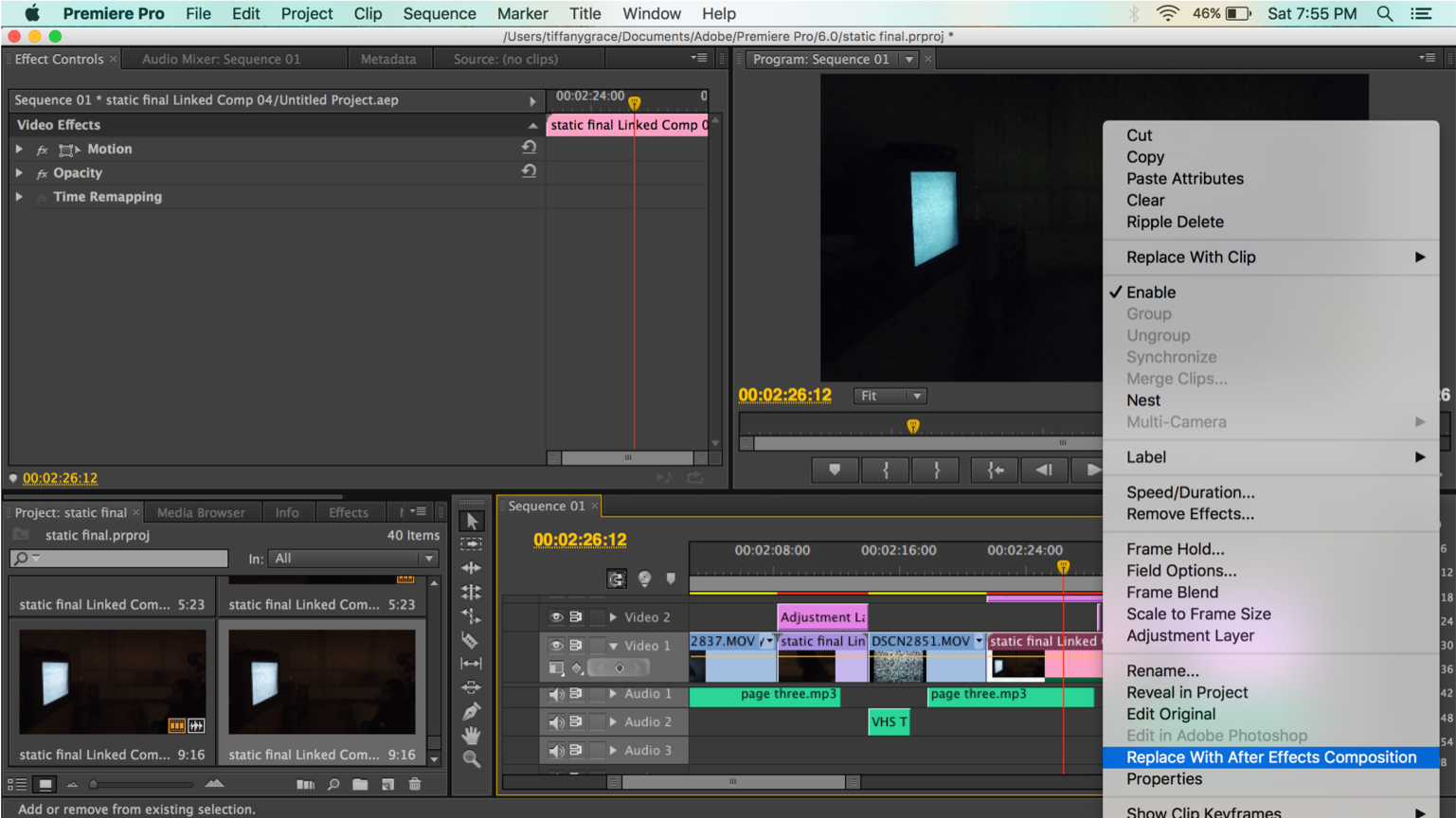 After my one day of filming the final clips for the project, it was time to move onto editing​I first tagged all the clips by colour to make it easier when importing files into Premiere. ​After tagging I arranged clips on the timeline, did some clipping, cleaned up the audio track, did some final touches and rendered the video. 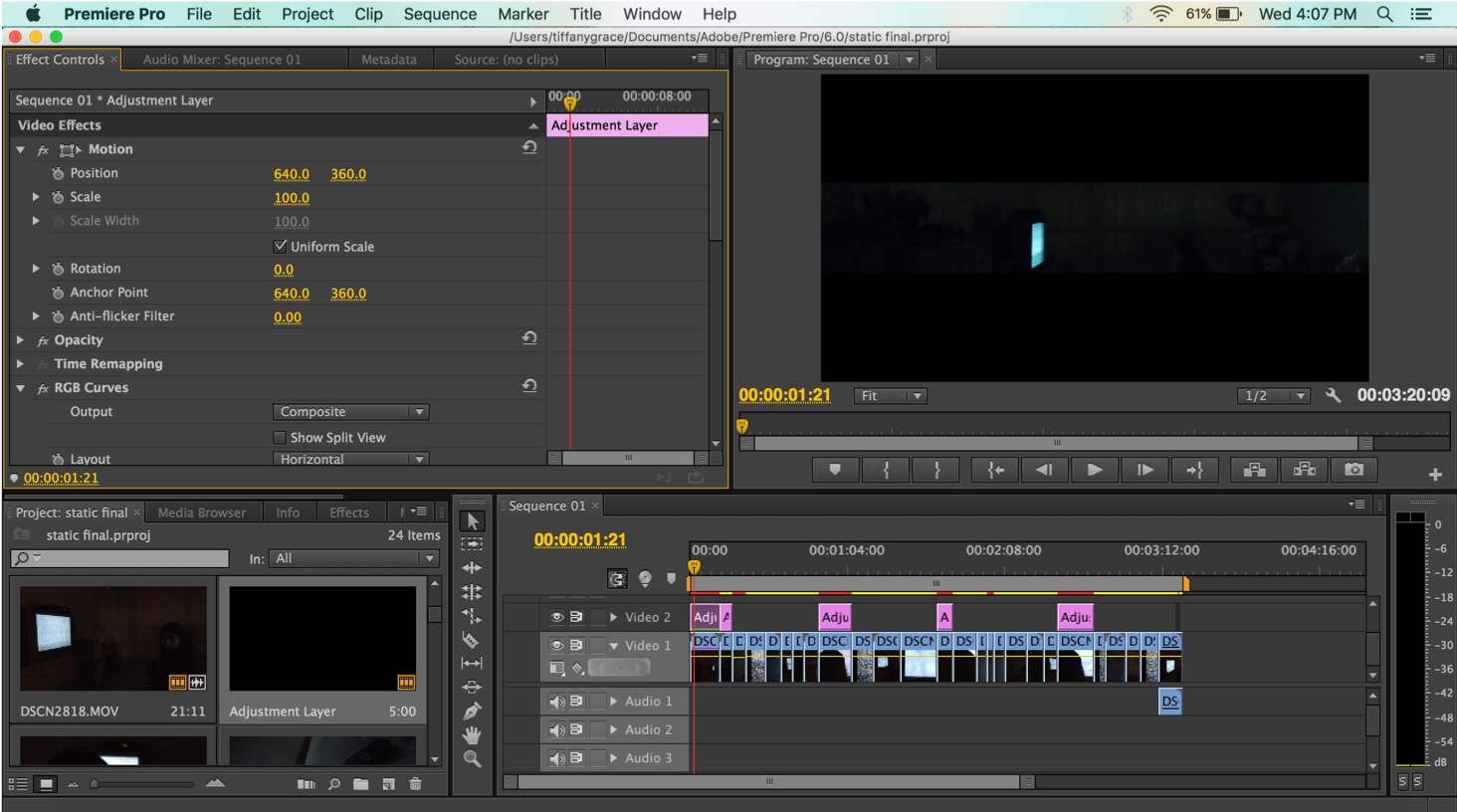 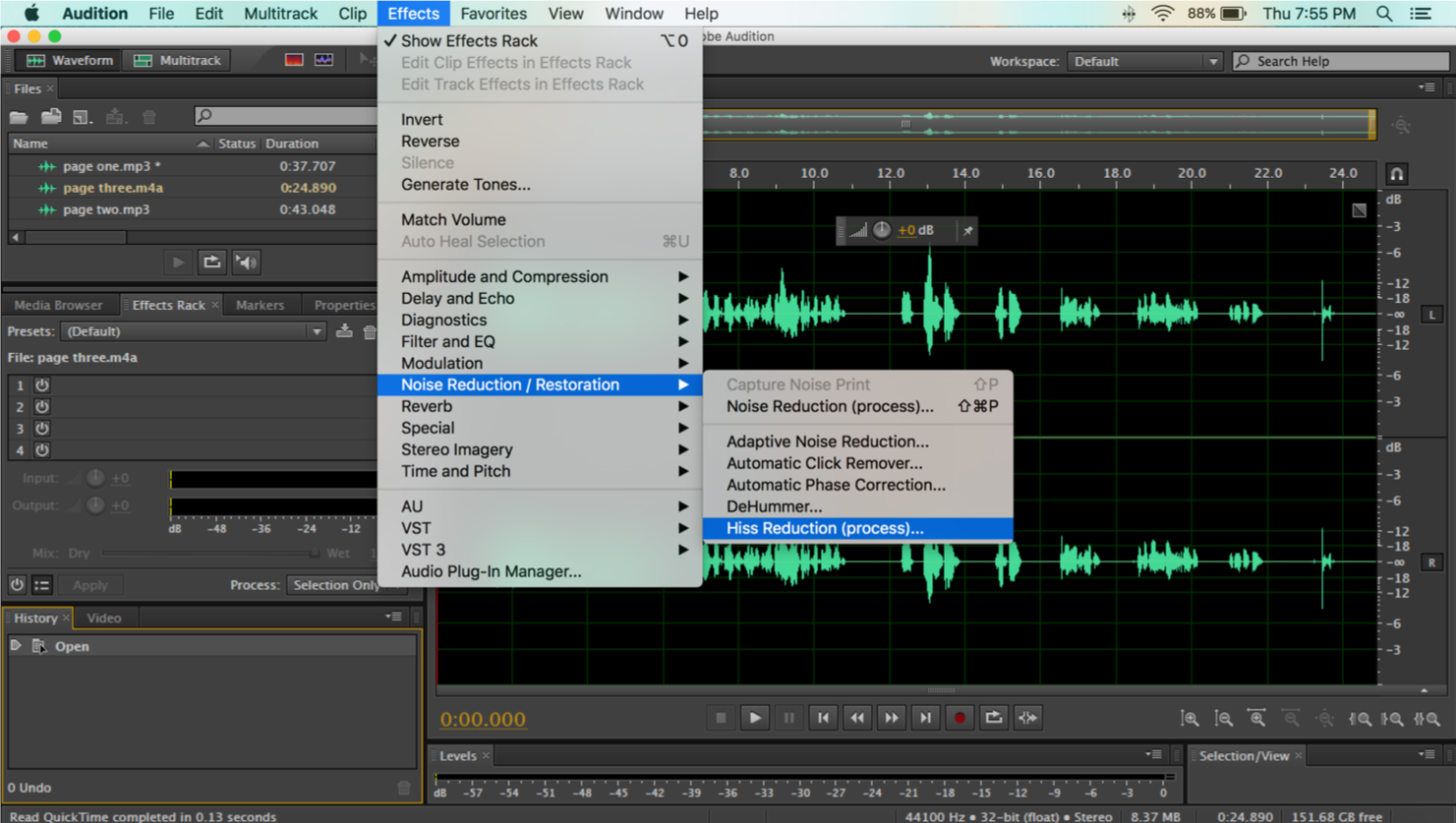 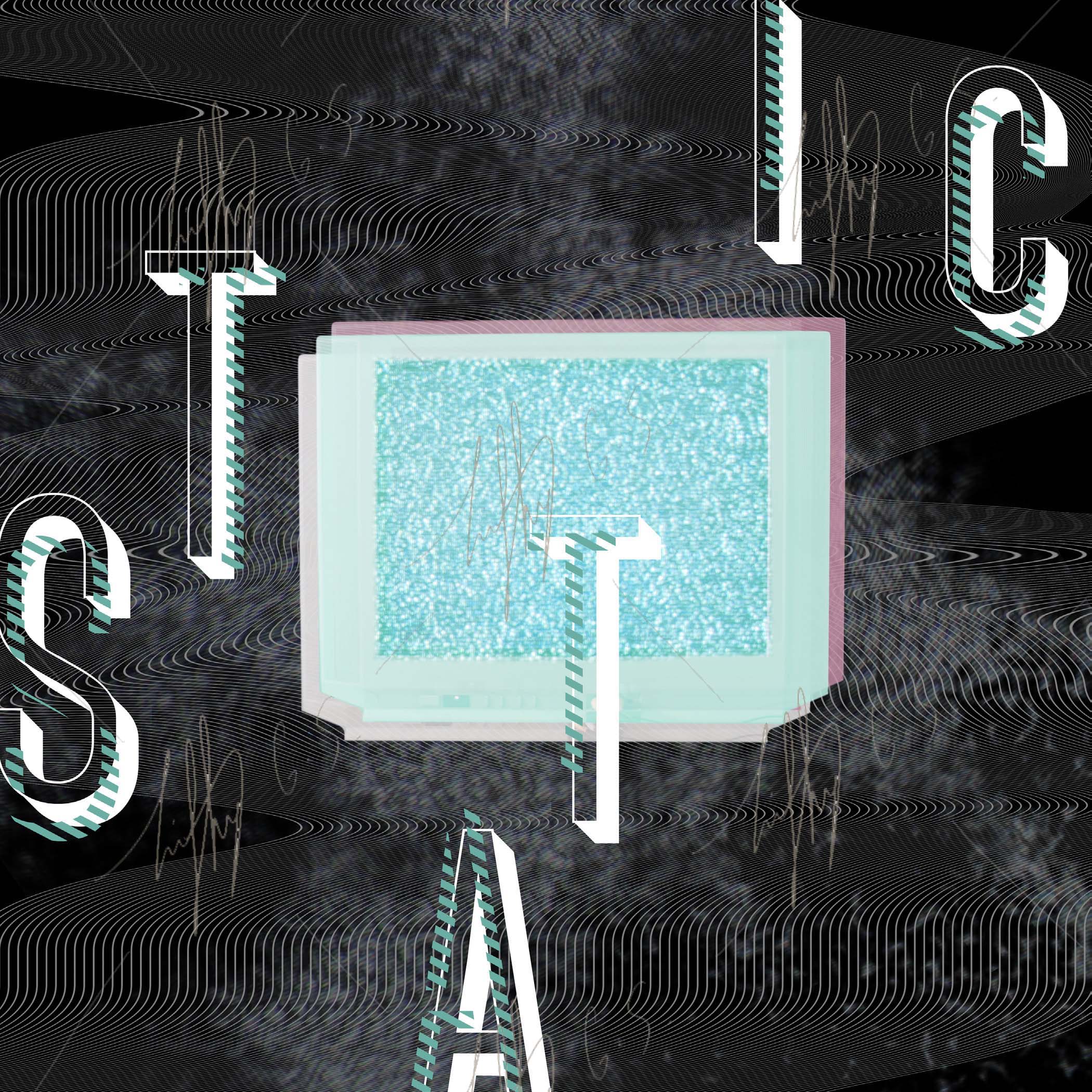 •  It was a good process, interesting to do
•  Wished it would’ve turned out better quality, “no-budget” film as a student
•  Enjoy the medium, would like to work with it again
•  I am naturally an emotional artist and glad I was able to express such a feeling
•  low light filming is very difficult to do
•  Glad this was the project I left CyberARTS with
‍

internships 20208 Bit Isolationstaticother creations 👀
back to top
back to home